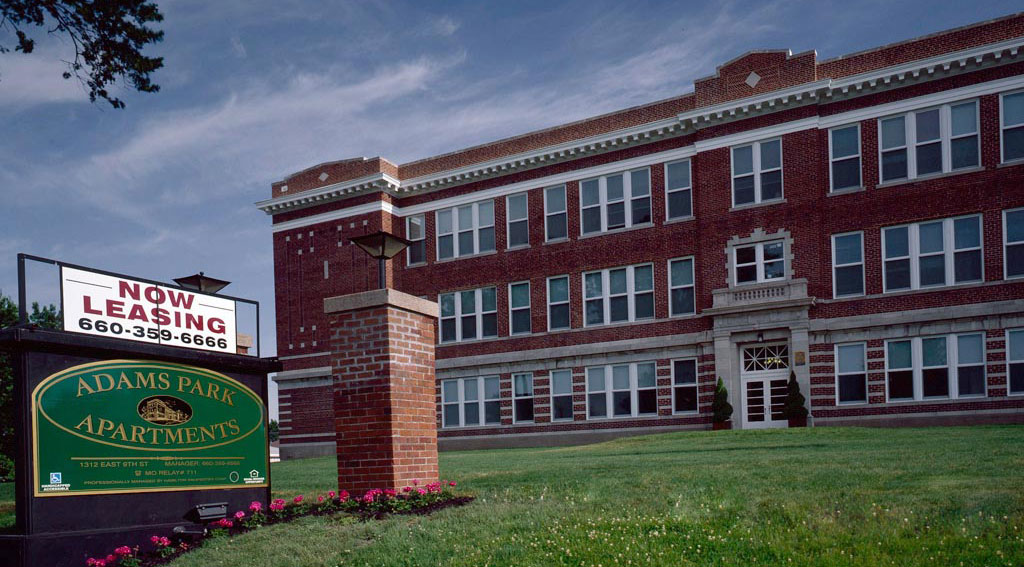 Please contact our leasing office for rental rates on our various apartment sizes.

Adams Park Apartments is located in Trenton, Mo. Trenton is a beautiful small city about 90 miles northeast of Kansas City. The Trenton area features Crowder State Park and lake with hiking trails, camping and fishing. Also in town are Moberly Park, museums, theaters and skating rinks, plus many other attractions.

Originally built in 1924, Adams Park was once the Trenton High School and has been converted and rehabilitated into 35 one and two bedroom apartments for senior housing. We kept a large part of the school auditorium for resident use for movies and other functions. Other in-house facilities include an exercise center, library, community room, and family kitchen and dining facility for large family or social gatherings.

Adams Park is a tax credit community, so income guidelines will apply. Some rental and utility assistance may be available.

Adams Park Apartments Featured in May Edition of UNITS

This converted rural Missouri high school represents the ultimate homecoming for one of its students. 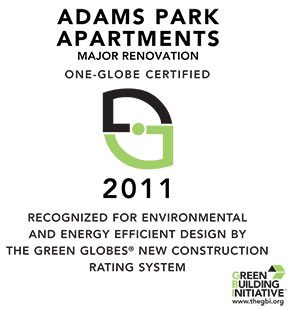 Saturday, May 19, 2012 marked the culmination of over three years of hard efforts and massive revitalization, when the grand opening and dedication was held for the beautiful new Adams Park Apartments in Trenton, Mo.

Once the community High school which was built in 1923, this historical building has gone through several uses over the decades and lay abandoned for a few years until Hamilton Properties Corporation took notice and targeted Adams Park to become a grand senior living experience featuring 35 apartment homes with community features such as a huge auditorium, roomy hotel style lobby, large library, internet cafe, exercise facility and many other resident benefits.

The grand opening day included a community dinner, tours of the entire property, and the dedication ceremony with remarks by Ken, Ryan and Douglas Hamilton of Hamilton Properties Corporation as well as manager Cindy Soptic. Also speaking were Steve Maxey (former student and Director of Development for North Central Missouri College), Cathy Smith (former Mayor of Trenton), Ralph Boots (Trenton Economic Development Director), Pete Ramsel (former director of Missouri Housing Development Corporation), and resident Kathy Coon who directed very heartfelt comments thanking the owners, and the management and maintenance staff for creating such a beautiful home for elderly and disabled people in Trenton and expressed the thanks from the residents for the opportunity to live in Adams Park with all of it's amenities. Mrs. Coon also singled out maintenance man Robert Hutchison for all of his much appreciated hard work, and presented manager Cindy Soptic with a bouquet of red roses in thanks for her resident-friendly service and managerial efforts.

The comments were followed by a ribbon cutting ceremony on the front lawn, officially opening Adams Park Apartments to once again serve the city of Trenton as an active and important part of daily life for so many of it's residents.